Currently, Samsung is in the strongest position among the smartphone brands. From the beginning of the mobile phone journey, Samsung has been coming up with one mobile phone buyer after another. All of today’s mobile phone companies manufacture smartphones. But Samsung’s smartphones are more popular with consumers than any other smartphone. When Samsung launches a new smartphone, the device is discussed among the buyers. Nowadays, Samsung’s M series has become very popular, which has increased the demand for all the phones in the series. There are many reasons for the increase in demand for M series phones.

Firstly, M series phones use large size batteries. Secondly, M series phones are priced much lower than other Samsung phones.Thirdly, devices with high configuration are available at low prices. As a result, buyers are a little more focused on M series phones. Today we will discuss Samsung M31 smart phone.

Samsung has recently launched their M Series M Thirty One phone and it has received a huge response from the consumers since its launch. Battery Backup, Performance, Camera Performance,  and all other features of this phone is very grate. The price is determined by considering all the features of this phone and considering the direction of the buyers. Samsung’s various smartphones are now being made in Bangladesh and are being priced differently with Bangladeshi buyers in mind.

Samsung Galaxy M31 is really good design but its build quality is average type. This phone has a camera bump with four cameras which is placed in a corner on the back of the phone. Like other M series phones, it has a fingerprint sensor right in the middle. The phone uses a Super AMOLED capacitive touchscreen display. When viewed from the front of the phone, it looks nothing but a 6.4-inch display, but the upper part is used with the camera attached in natch display. The size of the smartphone is 159.2 x 75.1 x 8.9 mm (6.27 x 2.96 x 0.35 in) and the weight of M31 is 191g. So, users will get the premium with the phone in hand and will be able to use it with easy.

The device uses plastic bags and plastic cream, and Gorilla Glass 3 is used as the front glass protection. This means that the phone lags far behind other phones in terms of protection. However, considering the price, the buyers will have to give some discount to the smartphone companies. Two SIMs can be used simultaneously in the phone.

The device uses the Exynos 9611 (10) nanometer chipset and uses Octacore (4×2.3 GHz Cortex-A73 & 4×1.7 GHz Cortex-A53). Such chipsets and CPUs Samsung users have seen before in their M series and A series phones. And the phone uses Mali g72 mp3 chipset as the graphics processing unit. Hopefully, Exynos chipset and Mali g72 mp3 GPU is expected to give a good performance together.

There is a lot to talk about the camera of this device as there are five cameras used in this phone. Four are on the back of the phone and one is on the front of the phone. The front of the device uses a wide angle lens with a 32 megapixel sensor to take selfies with the Aperture 2.0 and the lens is 26mm width. The first of the four rear cameras is a 64-megapixel camera with an aperture of 1.8 and the lense is 26 mm width. With a 64 megapixel sensor, its image will be very accurate and clear because it has a very good aperture.

Then an 8 megapixel ultra wide angle lens with an aperture of f2.2 was used. So this is good news for those who like wide pictures. And one more nice thing about it is that it uses macro and depth sensors of 5 megapixels with aperture of 2.4 and 2.2 respectively. Having a macro lens allows a subject to be exposed at close range and  portrait image to be found due to the depth sensor. Samsung has used different types of lenses in their device with all types of users in mind so anyone would be interested to buy this phone.

This device can play 4k resolution video from section font and rear deposition. And this device allows users to capture video in slow motion so there is no way to complain about video recording. The fingerprint sensor used in this phone works very well.

There is no need to question the battery backup on this phone as it has a 6,000 mAh battery. Samsung has already used 6000 mAh batteries in some of their M series phones. The device comes with a 15 watt fast charger which will take more than two hours to fully charge the battery of this phone. Having a 6000 mAh battery will be of great benefit to those who long time use the phone and those who like to play gaming, as the phone can be used comfortably for two days once cultivated.

Above all, the features used in the Samsung galaxy M31 smart phone will not allow any user to lodge any complaint against the phone. But it is worth considering the price of this phone. 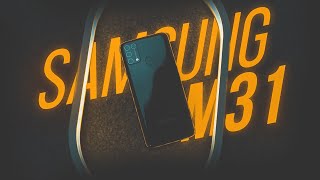