Realme currently occupies the highest place in the smart phone market. After coming the Realme Phone, there have been significant changes in pricing and policies of other smart phone bands. In this case, Realme not considers the quality of their phones and tries to keep their smart phones at a lower price compared to other brands. Recently, Realme Bangladesh started to produce their smart phones officially in Bangladesh and keeping with the low price than other brands. Realme is going to launch another phone in their X series recently. Following the success of the Realme x2 and x2 Pro, this time a new phone is going to be launched in the x3 and Realme x3 Pro models. The realme X2 and X2 Pro phones were very popular, so, we hope realme x3 will be a popular phone. Realme is going to add some new features to their x3 phone, and to stay ahead of the competition from other brands like Xiaomi and Samsung. The price of the phone plays an important role in the popularity of a smartphone. So we hope that realme fix the price of this smart phone by consideration. What will be the Bangladeshi value of the Realme x3 has not declare officially, but we know some news in different ways. In order that, the realme x3 will dominate the market. However, no talking anymore now we discuss the specification of the phone.

Now we will discuss the design and build quality of the Realme x3 phone. Like every phone in the Realme X series, this phone has a gradient glass body. So, in terms of beauty, Realme Phone did not disappoint to users. In comparison of realme x2, realme use in x3 a punch hole display. Hopefully the Punch hole display will enhance the beauty of the phone. The phone uses the in-display fingerprint sensor and the volume button and power button are attached to the right side. So, in term of design the x3 phone is not change something. The design or the beauty of the phone will not matter too much to the users, if the price of phone is considered. The phone has a 6.4-inch punch hole super AMOLED display that can be used to deliver 403 ppi resolution. It is possible to use two SIMs and one memory card simultaneously on the phone. Therefore, anyone can use the internal storage as well as the memory card to enhance the external storage. Where the camera bump is placed on the back of the phone is not yet to be revealed, but hopefully the x3 may also be used in the middle, like the X2.

Speaking of performance, the x3 doesn’t have much place to complain. Realme uses Qualcomm Snapdragon’s chipset on their x3 phone. However, it performs better than all other chipsets. Mid-range smartphones generally do not use any chipset other than Snapdragon. However, some smartphone brands sometimes use MediaTek chipset to reduce the price of their phones. Some brands also use their own chipset. For example, Samsung uses their own chipset on some phones, and use Qualcomm Snapdragon’s chipset on some phones. Decide what kind of chipset will be used on the phone and at what price will the phone be sold. The price is considered based on what type of chipset is used in the phone. The phone has Snapdragon 855+ chipset and uses a Octa-core (1×2.96 GHz Kryo 485 & 3×2.42 GHz Kryo 485 & 4×1.78 GHz Kryo 485), Hexa Core processor. This phone is a 64 bit architecture phone with 6GB and 8GB of RAM variant and adreno 640 has been used as a GPU. so, no mistakes were kept in terms of performance. This phone will be great for heavy gamers and will not be a problem for normal users. There is no difficulty in multitasking due to gaming processors and good GPU usage on the phone.

Battery and charger of Realme x3

Battery is a focus point for a smart phone. A large battery makes a smart phone charming. Realme offer their customer a 4200 mAh large size Li-ion non removal battery. The 4200 mAh battery gives the phone captivating and attractive. Realme use this device VOC fast charging technology that create a new innovation in smartphone charging technology. Realme gives their customer 30W fast charger with X3 phone. Therefore, there are no question about battery and charger.

Above all, The realme x3 will be a good mid budget phone. In the region of price range some disadvantages have to accept. So, considering everything we can say this phone is not bad in this price range. 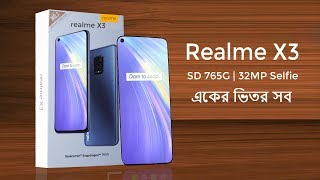